Cowes Week 2019 saw a full barrage of Autumnal weather conditions batter the island. This resulted in the first two days of racing being cancelled for many of the fleets and classes.

While many used the time to watch the exciting SailGP races from Egypt Point many more were chomping at the bit to get racing. 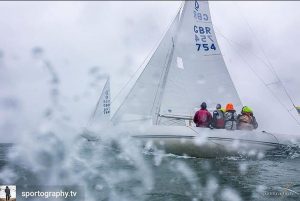 The Solent continued to produce a wide range of weather conditions during the week. The nine Dragons and 30 sailors raced through winds of 25 knots, rain squalls and rough seas. Graham Bailey’s Aimee sailed a great regatta with a near clean sweep of bullets to take overall first place. Onboard Aimee  Graham was joined by an all-female crew of Julia Bailey, Sophie Heritage and Gillian Hamilton.

Martin ‘Stavros’ Payne commented: “It was an amazing result this week for team Aimee. The winds were extreme for Dragon racing with big sea’s and vicious unpredictable gusts. The three girl power team crewing with Graham did a great job in all manoeuvres, in particular genoa tacking/sheeting and spinnaker hoists & drops. This was full-on sailing!” 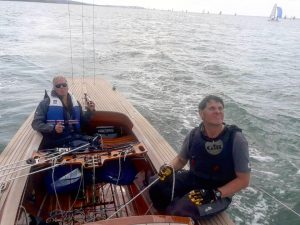 Graham Bailey’s Aimee was not the only team with three women onboard. Gavia Wilkinson-Cox’s Jerboa, helmed by Gavia who is a huge advocate for encouraging women sailors to join the Dragons, included two female crew Emma Hattersley and Ellie Hutchings along with regular team member Mark Hart.

It was testing conditions for all sailors on the Solent and it was great to see the Dragon class proving that you do not need to be big, or a man or an adult or fully fit to go racing. It was fantastic to see Richard Davies helming the beautiful Flotation in the conditions and still pushing hard with a second place on day three.

The adorable Rhys Millband talked to Nic Douglass during Youth Day after sailing on Glaurung at his second Cowes Week. At only 6 years old, while he may not be interested in the results he does love to go fast. Dragon racing is exciting for everyone!