Over 30 Dragons and up to 100 sailors will be heading to North Wales this weekend for the 2019 Dragon Northern Championships and Haulfryn Edinburgh Cup. The 71st edition of the British Dragon nationals will include many past Dragon winners and Edinburgh Cup champions.

We talk to 1999 Edinburgh Cup winner Martin Payne on the 20th anniversary of his memorable win in Lowestoft.

I was 10 years old. My parents booked me into the Island Cruising Club, in Salcombe. It was a local Sailing Centre where you based yourself on a House Boat up the “Bag” of the Salcombe Estuary and instructed with the basics of sailing over a long weekend.

What was the first boat you sailed in?

A Mirror Dinghy, they were ideal and we had a local fleet in Salcombe where I joined the Salcombe Yacht Club soon after my initial ICC weekend, 52 years ago!  We built three Mirrors at the club, which could be used by any of the Cadets, we were very lucky.

Where did you have your first race win and in what boat?

How did you get into Dragon sailing? 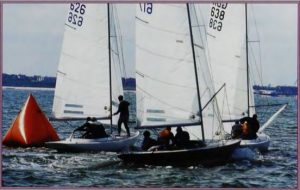 In 1992, whilst teaching at the Torquay Boys Grammar School. I was travelling over to Salcombe each weekend to race Salcombe Yawls, when someone mentioned, “Why not race in Torquay instead of driving to Salcombe”?  I was fortunate to be offered a chance to helm a wooden Dragon GBR 430 Ran, I loved it and never looked back. After winning the local Torbay Regatta and taking Ran up to Lowestoft for an East Coast Championship, I met “The Man” Poul-Richard, who introduced me to Anne Garrett. Anne purchased a 1991 Petticrows Dragon Lady and we won Cowes Week in 1993!

It’s one-design racing at the highest level. Fellow competitors are great sailors and very sociable both on and off the water. We get to visit wonderful places and I have enjoyed meeting different people and making many life long friends.

You are well known for your experience as a Dragon sailor and we often see you on the water as a crew, helm or coach. What is your favourite position in the Dragon? 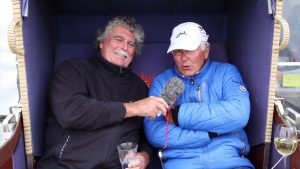 Helming, it is the easiest position on the boat, especially as you get older.

How did it feel when you won the Edinburgh Cup?

It was a joint effort with David Hall and my School Sailing Captain, Adrian Stanislaus. I had to miss two races through illness, but David and Adrian managed to keep up the good results until I returned and we sealed the victory. We were all very happy indeed and Lowestoft will always hold a special place in my heart.

What are your favourite memories of this event? 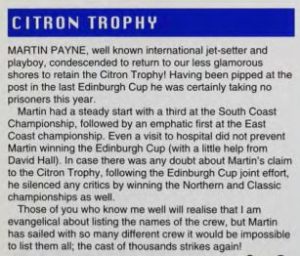 Every Edinburgh Cup is special. I have also finished runner up three times as a helm and recorded several top 10 positions as crew. It’s format of six races over the four days is still popular and you need to be at your very best to make the podium.

The Edinburgh Cup comes with a lot of history do you think this is why it attracts great sailors every year?

Tradition! Winning the Edinburgh Cup is every Dragon sailors dream. This year we race in a beautiful location and have an extremely competitive fleet. All we need is some nice weather….

Go Higher, Faster, Longer…… than all the other teams  🙂