This year’s British Dragon Northern Championships and Haulfryn Edinburgh Cup, held in Abersoch, will see for the first time an all-female youth team taking part in the prestigious national event.

The 71st British Dragon nationals has attracted sailors of all ages from all across the UK and further afield. This year the BDA and local Abersoch Dragon fleet have worked together to encourage younger sailors into the fantastic world of Dragon racing. International Dragon Amazon was offered to a visiting youth team to enter both events and use the Dragon at no cost. The individuals chosen is a young all-female match racing team from the Wirral.

With just under one week to go before the start of the Northern Championship that leads into the 2019 British nationals, Haulfryn Edinburgh Cup we chat to Athena Racing skipper, Octavia Owen. 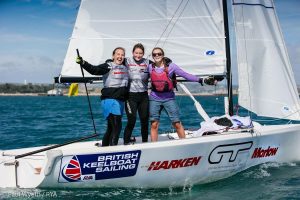 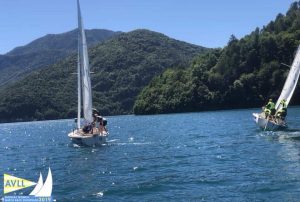 Octavia started sailing at four years old and began racing at only eight years old. While her first boat was a Cadet Octavia has sailed in a wide variety of craft including Albacores, 29ers and now the International Dragon.

Where is your home sailing club?
I live on the Wirral and race mainly at West Kirby when I’m at home on the marine lake or on the tide. It was at West Kirby Racing that I had my first ever win in the club races in Cadets.

When was Athena Racing started?
Athena Racing first started when I received the first invite to the WIMseries in Lysekil, Sweden. We decided on a team name that we thought was catchy and brought us together as a team. Athena was a patron goddess of the city of Athens after a competition with Poseidon.

“Myself and the team have never sailed a dragon before
but we are really excited for this new opportunity
and challenge to race against such experienced sailors.”

You have done so much travelling, where are you favourite places to race?
So far we have travelled as far as Russia, ST.Thomas and San Francisco and have had closer races in Italy, Poland and Sweden. My favourite places to race are where the tide, wind and competition have been challenging such as the Nations Cup in San Francisco. This was racing with an incredible amount of tide along with wind which made the racing such a challenge, it’s exciting.

These conditions have pushed us to refine our skills, each race bringing on our performance so much overall. We loved Racing in St. Thomas because of the shifty conditions which made it hard to hold your position. Even though we made mistakes during racing we were able to use the conditions to our advantage to gain control again. When we gave Normandy Match in Pink team a challenge by overtaking from behind taking them out before the finish (although we didn’t win, getting a penalty on the finish) it felt amazing to actually give a team you aspire to be like one day a challenge and that’s what we want to continue doing in each event we compete in. 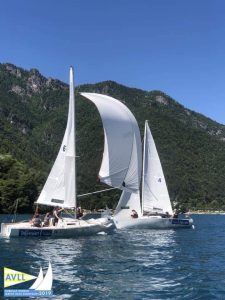 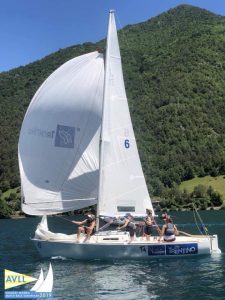 What did it mean to you and the team to be awarded with the inaugural Ian Atkins Keelboat Award earlier this year?
As a struggling young skipper to continue competing at a level we have achieved it has big costs for entries fees. To be the inaugural winners of the Ian Atkins Keelboat award has been a lifeline and has meant we can continue competing for another year with the team. It was an immensely proud and emotional moment to be presented the award by Ian Walker at the RYA Dinghy Show. We can’t thank Ian Atkins and the John Merricks Sailing Trust enough for this fantastic opportunity to work towards pursuing our dreams!

Have you sailed a Dragon before?
Myself and the team have never sailed a dragon before but we are really excited for this new opportunity and challenge to race against such experienced sailors. The first time we have sailed one was recently, 29-30th June. 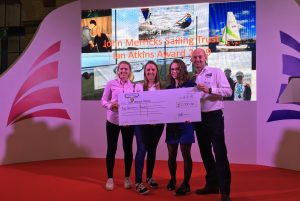 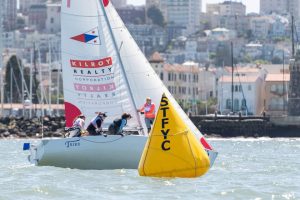 How do you feel about being the first all-female Dragon team competing this year?
We are most certainly excited and over the moon to be the first all-female youth team to be competing in the Edinburgh Cup. After Racing this weekend at SCYC for practise on Amazon all the sailors have been so welcoming and encouraging its been wonderful and so grateful for their useful advice and words of wisdom, especially Rob who has given up his weekend to show us the ropes onboard.

Team Athena Racing would like to thank the owners of Amazon, the SCYC and British Dragon Association, their sponsors Rooster and Overboard Bags and Bangor University & Portsmouth University for their fantastic support.