Restoring or Updating your Classic/Vintage Dragon

You’ve just bought an older Dragon, probably a GRP boat built between 1973 and 2000 and you want to sail it competitively but you realise that the rig and equipment in it is probably no longer state of the art and wonder whether this will be a problem. This article attempts to demystify what is required. The first step is to read the Class Rules, which are available on the IDA website. In particular note Rule 1.63 if you have major work in mind. Then the content of this article is divided into the hull, the rig and the fittings. There is, however, one consideration common to everything which is that every piece of equipment should work easily and perform its allotted function. Do check this because there is nothing more irritating than pulling hard on a rope to no effect. 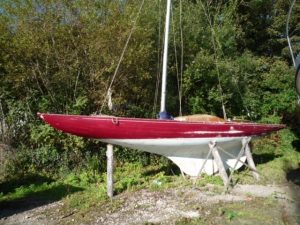 Dragons have almost all been built to a very high standard. So long as your boat was built by one of the main builders and hasn’t been involved in collisions, strandings or road accidents there shouldn’t be any major problem. However, it is well worth thinking about:

Hull smoothness. Is there a buildup of rough antifouling or paint? If there is, it is well worth removing it to get down to a good, smooth base.

Correctors: The certificate, and measurement form if you have it, should state whether the boat originally had correctors. If it did, and they are still there, it is worth weighing the boat. It is highly likely that they can be removed.

Bulkheads: Boats built before March 1991 don’t have bulkheads unless they have been retro-fitted. It is worth considering fitting them but it depends on where you are sailing, especially the depth of water and the amount of support and other traffic around. It is a trade-off between extra weight and some inconvenience from loss of usable space and safety. Dragons without bulkheads sink very quickly.

Cockpit height: Most older boats have lower cockpit floors than the most modern boats. This is a nuisance because it makes crewing rather more difficult and also makes it harder to lead control lines back to a mainsheet beam or barney post. However, any changes are likely to be difficult to implement in a GRP boat and certainly require attention to Rules 1.63 and 2.505 to 2.508. My recommendation is don’t bother. 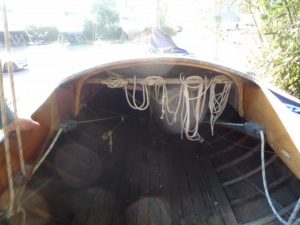 Genoa roller: All the commercial mechanisms I have come across work well below deck whether they are positively driven or operate through a drum so long as the bearings are greased. However, it is undoubtedly better to have the halliard come from a slider on the forestay which has bearings for the genoa and the halliard and then down the mast rather than back down the forestay inside the luff zip as in older Borresen boats.

Jumpers: The simplest answer of all is to have fixed jumpers. Adjust them so that the mast is straight sideways and the back of the mast is slightly inverted. Make any final adjustments to fit your mainsail.

If you like adjustment there are various systems for adjustment under way. The most common ones adjust both jumpers simultaneously and normally give power of about 8 to 1. I suggest that it isn’t worth having the ones that adjust each jumper wire individually. In theory it is interesting but over complicated in my view.

Mast gate: The rules changed in 1991 to permit 50mm of movement for the mast at the deck rather than 20mm. This made it essential to have a mast ram. If your boat hasn’t been modified for this rule change you should go ahead now. This will probably mean enlarging the mast hole in the deck and making a hole for the rigging screw  connecting the mast to the ram in the coach roof. Most rams have a single line which provides a positive movement in either direction though an alternative is to use powerful shockcord to pull the mast forward.

Runners: On some older boats the runners come to the side of the deck near the back of the coach roof. They should be moved to the stern and turning blocks fastened to the internal reinforcement either on the stern or on the side. This gives a better angle and less compression though they do have to be tacked. 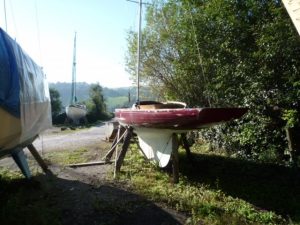 Spinnaker chute or not: This has been a contentious subject for many years. Most boats use a chute and this is more reliable than hoisting and recovering from the cockpit unless you have very well trained and regular crew. The alternative of sending the foredeck hand to the bow as you approach the windward mark to clip on a bag with the spinnaker in it isn’t recommended though it used to be commonplace.

Spinnaker pole gear: There is a choice between the system which has the pole lying on the deck attached to the spinnaker and a track on the mast and the system which stows the pole along the boom. The first requires more practice to get right and has the disadvantage of the pole’s weight on the deck. It does, however, give a faster hoist from a standing start. I’ve used both and think it is fairly evenly balanced.

Genoa sheeting: Several different systems have been tried. They should position the clew close to the cockpit coaming and be capable of easy adjustment, preferably from both sides of the boat, to raise or lower the sheet angle. Some also enable one to move the lead block sideways but this is less important. It doesn’t really matter which system you have so long as it is capable of easy adjustment and delivers the desired position.

It is almost essential to be able to adjust the genoa sheeting from the windward side of the boat. Usually this is done by the foredeck hand using a tackle led through the coachroof. Many older boats have winches. If yours does, you have a choice between putting the turning block on a tackle led through the deck or removing the winches and bringing the genoa sheet to a cleat on a traveller on a track mounted under the side deck controlled by the windward sheeting tackle. In my view the only reason to remove the winches is weight. Otherwise it is as easy to do the initial sheeting in on a winch as it is on the traveller. The winch is arguably more foolproof for inexperienced crews. The power of the fine tune should be 8 to 1. If there is no winch the tackle should be double-ended to permit adjustment from the leeward side.

Runner tackle: Modern genoas are designed to work with a 12 to 1 power on the runners. If you don’t have this the forestay sag may be greater than the sail is designed for if there is much wind. The winches and levers that many older boats have do not give this much power and it is worth replacing them. The normal arrangement is a 2 to 1 coarse tackle which cleats on the mainsheet horse or barney post and then a 6 to 1 tackle coming to a point close by. It is important that both are easily accessible from the windward rail. The fine tune has to be tacked upwind and the coarse may need to be let off if you want to bear away to duck another boat. So don’t put the coarse under the side deck where it can only be operated from within the cockpit. 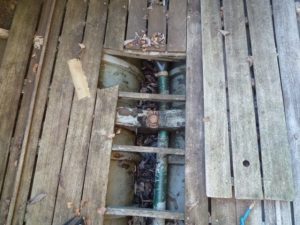 Barney post vs mainsheet horse. I personally prefer the horse. Above all, in very light airs I can more easily get the boom on the centre line without much mainsheet tension. I’m prepared to put up with being in an exclusion zone as a helmsman as a result. Whichever system is chosen it needs to be capable of taking a reasonable number of controls and they must come to hand easily.

Control positioning: Controls will basically be either on a beam under the coachroof or on the mainsheet horse. It is very much a matter of choice what goes where though it will be influenced by the ability to run ropes under the cabin and cockpit floors. However, some are more obvious than others:

Kicking strap(vang): Mainsheet horse or close. This is essential so that the middleman can let it off in a hurry to avoid broaching.

Jibroller: probably coach roof beam but may depend on system.

Others by personal preference or, more likely, by them staying where they already are.