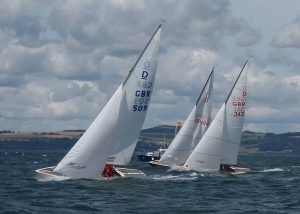 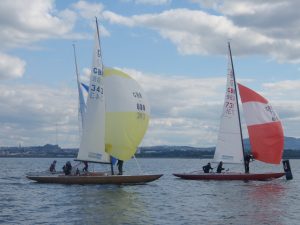 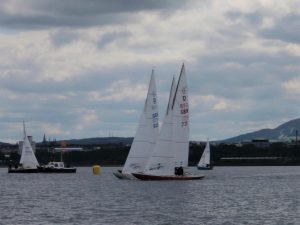 The first Dragon to arrive in Britain was ‘Anita’ which arrived on the Clyde, from Norway, in 1935. There was an immediate surge in interest and in 1936 ten Dragons were built at the McGruer  yard on the Clyde. There have been Dragons continually based on Scottish waters but the active fleet is currently based at the Royal Forth Yacht Club, Granton Harbour, Edinburgh, with quick access to wonderful sailing waters.

We have racing from April until the end of October, with racing on most Saturdays, some Sundays and two weekday evenings each fortnight. The club has its own pillar crane, a storage yard and also all tide access with use of our shared pontoon.

The Royal Forth Yacht Club is celebrating its 150thanniversary this year and we also have an 80th Birthday for our oldest fleet Dragon ‘Solan’ K65, built in 1938 by Johanssen, Sweden. ‘Solan’ lives on a mooring in the harbour along with the five other racing Dragons that are a mix of vintage and classics.

Royal Forth sailors historically had great success in the Edinburgh Cup when it was not held in home waters but the most recent win was Rob Brown in 1994. David Young also won the Gold Cup as well as the Edinburgh Cup. There are fleet members who are keeping boats for campaigning and we wish them every success in wider waters.

We would welcome new members, prospective Dragon crews or any owners who want to be come and join our competitive racing on our fantastic sailing waters. Along with our extensive racing calendar we have an active and fun social side as well and the Dragon crews are usually in the thick of it!

Key dates for your diary:

For more information please contact the club on royalforth@btconnect.com or the Scottish fleet captain Cathy Ogden at cathy.ogden75@gmail.com