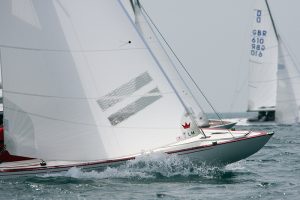 We sail Dragons because they are:-

Elegant. Racing Dragons comes with the timeless beauty that instantly catches the eye of sailors and non-sailors alike. Even when in a travelling cover on a trailer it draws admiring looks and comments when re-fuelling the car at a motorway service station on route to a regatta.

Designed over 80 years ago, the Dragon has stood the test of time and is now more widely sailed than ever before. Faster, more modern, but less elegant, keelboats, even one design classes, come and go, but Dragons are seemingly immortal. There are good reasons for this. It may be its appearance that first attracts us to the Dragon but it is its many other qualities keep us hooked. 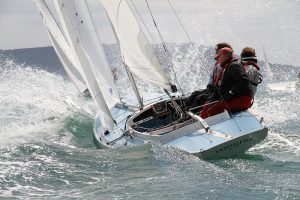 But Modern. The rig and controls have been progressively updated making the Dragon easy to sail but challenging to get that little bit of extra boat speed from it. The Class Rules are strictly enforced and International Dragon Association (IDA) in conjunction with the ISAF has managed the changes carefully such that older boats do not become uncompetitive overnight. While most Dragons are now built in GRP using the best current methods and materials, new wooden Dragons are occasionally still produced and classic wooden boats are restored or upgraded and thereby remain fully competitive and can, and indeed do, win major events.

The modern Dragon has a rig and sails that can be easily adjusted to suit the prevailing conditions.The latest innovations are progressively introduced (e.g. Dyneema runners and backstay) and there are plenty of “strings” to pull in search of that extra speed. 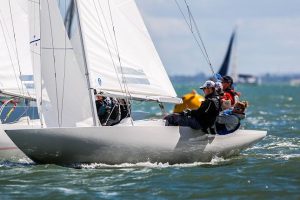 One Design providing boat on boat close quarter racing where the result does not depend on boat design (favourable handicap) or weather conditions. Sailing skills: boat handling, boat tune, team work and tactics determine the winner. However fleets are very competitive and it is rare for one helm to win more than two races in a 7 race series, and no matter where you are in the fleet there is a Dragon nearby to race. With the fleet sailing in close proximity, racing a Dragon is like racing a big dinghy and is always exciting.

Crewed by only 3 or 4. The weight-limited crew normally of 3, exceptionally 4, are involved all the time. Such is the level of competition that most teams find they need to split the helmsman and tactician roles. Certainly nobody is there just as ballast on the rail, so with fewer people required and everyone kept busy, crews are easier to find and keep. The crew weight limit and the fact that a 4th person is allowed (but must sail throughout a series/regatta) mean that, on windier days, lighter people remain competitive. Many Dragons include females in the crew, and lady helms compete successfully on equal terms. 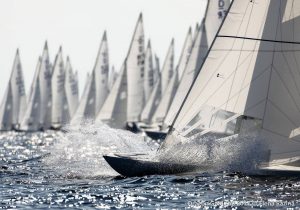 A Dynamic Class. The Dragon is by far the most successful and enduring keelboat class in the world. It is sailed in at least 30 countries, mostly in Europe but also in USA and Canada, Australia and New Zealand, Hong Kong and Japan, Turkey and Egypt to mention just a few. Its history as an Olympic Class helps here, but more countries now sail Dragons than did during its Olympic era, and new countries are still joining the International Dragon Association, South Korea being the most recent. Over 1400 Dragons are registered with their national class associations with many more classics now used for cruising particularly on the lakes of Switzerland. The UK has the second largest fleet after Germany.

More than 40 Dragons are built each year and there is a good market in quality second hand boats. This protects the value of our yachts, which do not become virtually worthless overnight as they fall out of fashion. 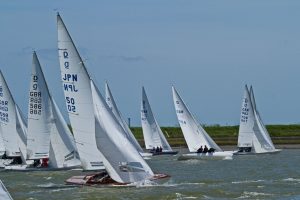 Sailed at Club, National and International events. Whatever your skill level is or sailing aspirations are, there are plenty of regattas to sail in both in summer and winter. There are currently 6 active Dragon fleets in the UK and 3 in Ireland (click on the side panel for details) organising regular class racing, with smaller numbers racing in handicap fleets elsewhere. The British Dragon Association (BDA) organises an open national championship (the Edinburgh Cup) and area championships annually. There are also Dragon fleet starts in various local “weeks” including at Cowes Week.

For those prepared to travel, and the Dragon is easily trailed, there is a very active international circuit. In fact one could race a dragon at 2 or 3 different venues in Europe each week or (long) weekend from March to October and there are two locations that hold a winter monthly series that attract up to 60 on the start lines. The IDA organises a European Championship and the Gold Cup (the oldest international Dragon regatta and it’s open to all) annually and a World Championship every two years. The BDA will host the “Worlds” at the Olympic venue in Weymouth in 2013, an event bound to further increase interest in, and the profile of, the Dragon Class. 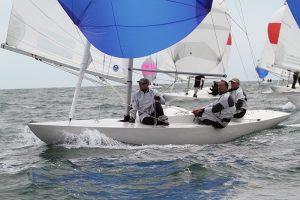 Sailed where the Sun Shines and the Water is Warm. Following on from the above, there are opportunities to race Dragons in some of the best sailing venues in Europe where the weather is generally warmer than prevails in the UK at that time. Whether it is a once a year treat or a regular part of your sailing, you could join a group of UK sailors who choose to mostly compete on the international circuit and enjoy great racing in places like St Tropez and La Baule in France, the Swiss and Austrian lakes, the Italian coast or Lake Garda, Scandinavia and the Baltic in summer, Monaco in February, Cascais (Portugal) or Cannes in Winter. Dragon sailors really are spoiled for choice.

A Friendly Class with Great Parties. Experienced Dragon sailors share tips and discuss the days racing ashore in the club bar or regatta beer tent. New comers are made welcome and helped if they ask for advice. Free drinks and often food and music are provided daily at open events, so the sailors tend to congregate after racing. There are welcome parties, prize giving parties and often class dinners, so the social scene is always lively. 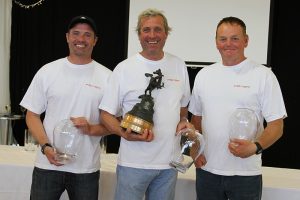 The choice of Kings, Olympians and Discerning Helms everywhere. Ever since King Constantine won Olympic Gold for Greece in a Dragon in 1960, “royals” have sailed Dragons and the Danish “royals” currently compete in major events. More importantly, many ex-Olympic sailors, including several who won medals, sail in the class together with countless past World champions from many other classes. The majority of the fleet are, however, ordinary sailors who enjoy pitting their skills against some of the world’s best, and on occasions beating them.

The Class allows professionals because we want to sail against the best, but major national and international events have trophies for all amateur “Corinthian” crews. Not that amateurs are outclassed by the pros; a Corinthian came second in a 13 year old GRP boat in the 2011 Dragon World Championships in Melbourne.

So, whether you are a dinghy sailor looking to move up to a keel boat, or an offshore racer looking for more exciting, less expensive racing, or even if you are new to competitive sailing, YOU should come and join us.