The Edinburgh Cup has been the British Open National Championship for the British Dragon Class since 1949. It was presented by the Duke of Edinburgh (Prince Philip) after the members of the Island Sailing Club presented Princess Elizabeth and Prince Philip with a Dragon named Bluebottle on the occasion of their marriage in 1948. This was also incidentally the first year in which the Dragon was an Olympic class. Bluebottle herself was to play a part in the competition under various sailing masters, finishing second in 1954 with Lt. Commander Hewitt, second again with Graham Mann in 1956 and third with Ross Coles in 1960. 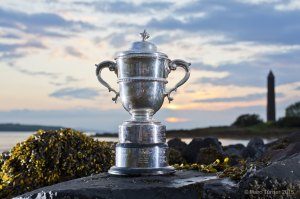 The first of the 62 stagings of the Cup was, unsurprisingly perhaps, in Cowes and was won by Franklin Ratsey Woodroffe, a patriarch of Cowes yachting in Blue Skies (K214). However, the intention was always to use the event to popularise the Dragon class around the country and for many years it was held at the yacht clubs which both had Dragon fleets and could stage a major championship. Nine such venues were used, ranging from Cultra and the Clyde in the North to Cowes and Falmouth in the South. More recently, as the Dragon class fleets were increasingly concentrated in tidal estuaries such as the Crouch and the Medway, the class has sought to use the venues which can best provide the mix of high quality racing and an attractive onshore ambiance capable of rivalling the increasingly competitive French Dragon regattas. The class also satisfies the geographic spread of its members and venues have included Abersoch, Cultra and Largs as well as South Coast venues such as Cowes, Lymington and Falmouth.

There have been many different winners over the years. The most prolific have been Rory Bowman with 6 1/2 wins Poul-Richard Hoj-Jensen with 5 wins and Tony O’Gorman with 4.  Nicky Streeter has won it 3 time and Glen Foster, Conor Doyle, Simon Tait, Kenneth Gumley, Franklin Ratsey Woodroffe, and Pat Dyas have all won it twice. Among the boats Galax (IR4) has won it 4 times and Loki (originally BBXXIII) (D245 and K503) has won it 3 1/2 times.

It isn’t easy to count overseas winners. However, there have been 9 winners who definitely lived outside Britain and Ireland from 6 different countries, Australia, Denmark, Germany, Italy, Norway, and the United States. On most of these occasions the Edinburgh Cup served as a preliminary event for one of the major International Dragon events, though there were also regular foreign visitors such as Thorkild Warrer and T. Corneliussen. Indeed, in 2010 in Cowes there were boats from 8 different countries, without the lure of an international event to follow.

In its 60s as an event the Edinburgh Cup remains a championship with a great deal of history which has always been difficult to win and therefore treasured even by those who have won many other events. The British Dragon class is determined to make sure that it retains this quality of competition and uniqueness.