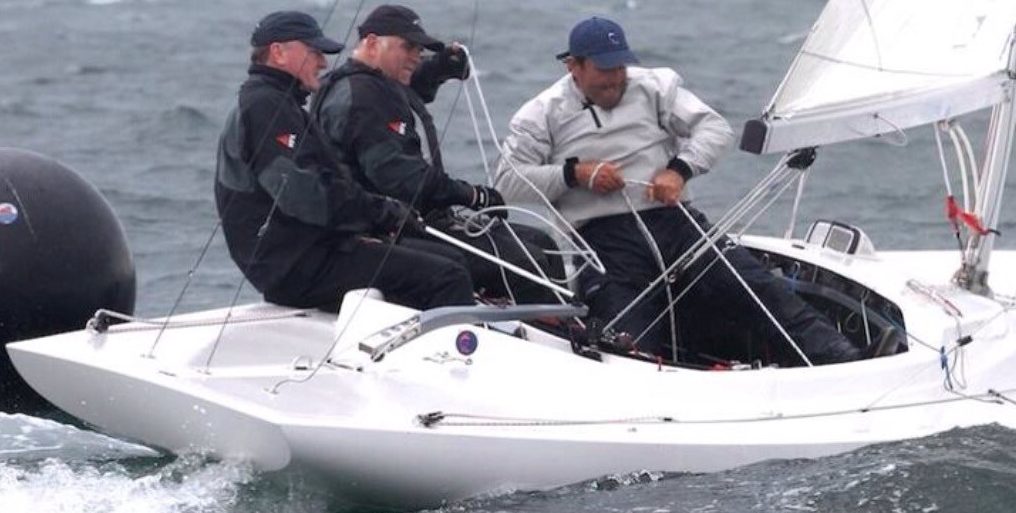 With just two weeks to go we caught up with Martin on his way home from the Irish nationals to find out a little more about the 2011 Edinburgh Cup winner, where it all started and why he loves this event so much.

I started sailing with my Dad in a Mirror dinghy when I was nine years old at Greystones Sailing Club in south county Dublin.

What was the first boat you owned?

My Dad bought me my own Mirror when I was 12 which I raced with my eight year old brother Rory.

Where did you have your first sailing race win and in what boat?

We probably won some Club races before our earliest success at the Irish Mirror National Championships in 1976.  We won the 1st race in a fleet of 102 boats.  I’ll never forget the sight of all the spinnakers behind us on the first run!!

When did you first sail in a Dragon? 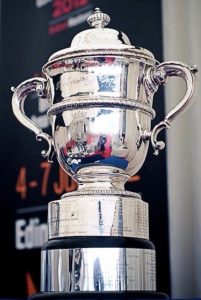 I occasionally sailed with my Dad in his Dragon in Dun Laoghaire when I was 17 but mostly I was sailing with my brother in a Fireball at that time.  Subsequently we campaigned in a 470, Laser, J24 and Cork 1720 before I bought my first Dragon from Andrew Craig in 2004.
Then I bought a new boat from Petticrow’s in 2007.

I only have an interest in one design racing so that would be the biggest attraction.  But I enjoy the meeting of other people who sail Dragons and the venues the Class chooses to sail in.  My wife Triona plays an important role as our shore crew and we enjoy travelling as a couple.

“I enjoy the meeting of other people who sail Dragons and the venues the Class chooses to sail in.”

You love to travel, where have you been in the Dragon and what is your favourite racing venue? 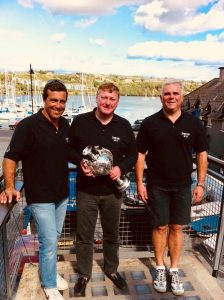 We have always sailed internationally in all the Classes I have raced so we’ve been to a lot of venues.  But Kinsale & Glandore on the south coast of Ireland are special places.  We’ll be back in Kinsale for the Gold Cup 2020!

Do you have a favourite type of condition to race in?

Not really.  I learned to concentrate in the light weather while sailing in dinghies but I enjoy the physicality and higher speeds in the windy conditions.

How did it feel when you won the 2011 Edinburgh Cup?

Humbled to be honest.  It was our first attempt at Edinburgh Cup in 2011 and it had been an ambition of mine since I was 16 to race in the this event.   When I was younger I followed the victories of previous Irish winners (Tony O’Gorman and Conor Doyle etc) at the Edinburgh Cups in the 1970’s through the Irish Times newspaper reports at home.  I was captivated then and always had an ambition to follow in their footsteps.  I was quickly brought back down two earth though in a conversation with my brother in law, Rory Bowman, who asked me to come back to him when I had won my 8th Ed Cup!!

What are your favourite memories of the Edinburgh Cup event? 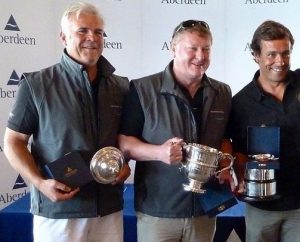 There are so many, but I will never forget the intensity of the last race in Abersoch in 2011.  We had to win that race to win overall as we were tied in 2nd with Klaus Deiderichs and one point behind the Russian leaders.  There were five attempts to start that race, mostly on black flags.  We nailed the committee boat to tack immediately and lead the fleet comfortably to go and win the race and the Championship.  We could hardly believe it as we sailed most of the race on our own.  It doesn’t happen often and it certainly hasn’t happened since!

The Edinburgh Cup is our favourite event as the people are so nice and welcoming (especially if you’re Irish).  So my first advice is to come and enjoy the experience.  However, if you want to win then you must tick all the boxes with your preparation and, …… for the love of God,  just find some way to beat the Bailey’s!