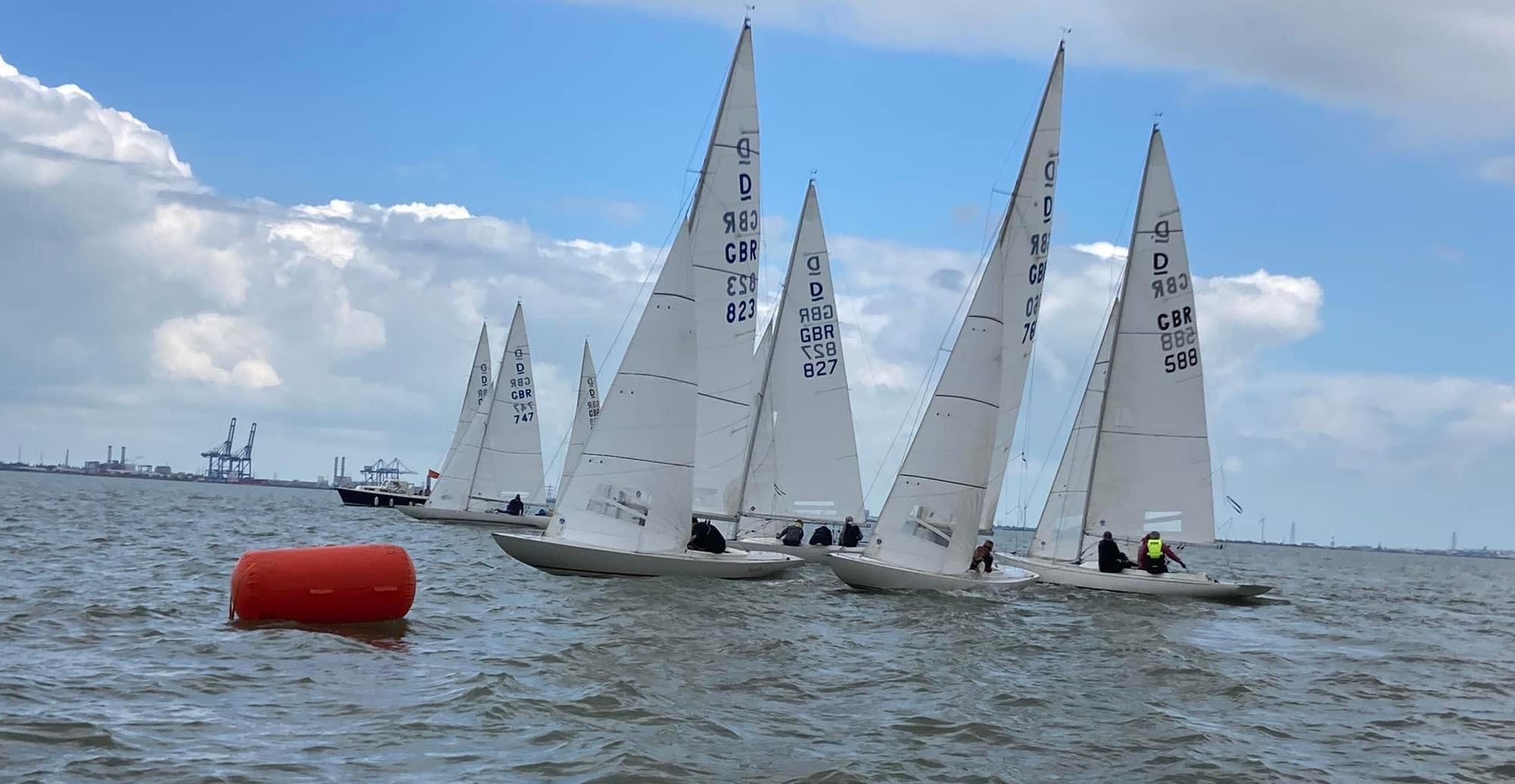 After the sad news of the passing of our Sovereign Her Majesty Queen Elizabeth II just before the start of our event, the obvious dilemma was should we be racing at all and cancel.

By Friday lunchtime we had carefully and thoughtfully decided the Queen would support us to continue with the event.  We did however ask each boat to fly a length of Black Ribbon as a mark of respect from the backstay on each of the ten  boats which had entered.

Due to the poor wind forecast on Sunday a change of the Sailing Instructions allowed for five races to be completed on Saturday rather than a maximum of four.

We were lucky enough to have a very strong race team with Stewart Coltart (former Dragon Sailor) our Race Officer, ably assisted by Catrina Coltart and Gerry Gray on the committee boat. In the two ribs were Mark Penny , Sarah Mason and Melanie Lay on one and Richard Stone and Catherine Gore on the other.  Both Mark and Richard are experienced Race Officers which they needed to be due to the 30- 40degree wind shifts all day!  They all coped really well only needing a short time between races before we were off again.  Really well done.

The wind was forecast from the WNW 9-13kts which gave us very good race conditions.  The first race seemed like the Edinburgh Cup with the windward mark way off in the distance.  After each race the windward mark was moved closer with the number of laps going up.  After five races a tow back was a welcome rest bite from Saturday’s sailing.

Drinks on the jetty became drinks under the marque due to the rain which started to fall as we came back in.  Shepard Neame kindly provided some local ales and plenty of doughnuts were consumed courtesy of ASDA!  This allowed us to recall the what ifs and we hit you but their doesn’t seem to be too much damage conversations.

The Championship dinner, due to the circumstances was toned down and I gave a brief speech to sum up mine and hopefully the Dragon Fleets feelings about the loss of our monarch including their association with the Medway Dragon Fleet many years ago.  A time for personal reflection was observed ending with a final toast to Her Majesty Queen Elizabeth II, may she rest in peace.

After the main course we then stood, this time for the loyal toast to King Charles III  ‘The King’.

On Sunday we only needed one race to complete the championship.  The briefing was postponed from 8.00am to 11.00am (to the relief of most).  After the briefing we rigged our boats and were told to wait on our moorings for the wind to come in and decision to race.  Around 30mins later the call was made for us to set off with a tow out for all to the race area along Gillingham Reach.  The wind unexpectantly started to fill nicely from the ENE and around 1.00pm race number six started.

Since first place had been guaranteed the race for second was the one to watch with GBR 760 Hands Off currently in second place on countback with GBR 747 Suti and GBR823 Taniwha one point back.  Hands Off couldn’t quite get past Suti and after a hour long, three lap race, Suti came in second with Hands Off in third.  Really well done to all , some fantastic close racing with multiple race winners worthy of a Championship Event.

My thanks go to all who helped organize this event, namely my wife Marie, Edwin and Sue Hannant, Stewart Coltart, Jamie Blair, Toby and Jacqui Atack and Carole Alcock.

The biggest thanks go to our two visiting teams Still Crazy and Hands Off and of course to virtually the entire Medway Dragon Fleet.  Thank you all and well done.

Next year the event will be held in Burnham with a date yet to be set.