Top teams on equal points at end of penultimate day

The scoreboard could not be tighter in this iconic championship at the end of the penultimate day of racing at the Royal Torbay Yacht Club. Graham and Julia Bailey’s Aimee and Grant Gordon’s Louise Racing are both tied on 10 points, with Aimee holding the advantage on count back. Laurie Smith’s Alfie is a single point adrift in third place overall.

The racing has been equally intense right through the fleet. Five boats are separated by just four points in the fight for fifth place overall. They are led by Klaus Diederichs’ Fever and Gavia Williamson-Cox’s Jerboa, both of which are on 26 points. Another group of five boats, led by Rob Campbell’s Quicksilver Vl and Ron James’ Fei-Lin’s Flirtation, are sitting on 74 and 75 points.

Today saw a return to bright sun, with a south-easterly breeze that peaked around 10 knots. Although the fleet spread out across the course on the first beat, the boats that headed right early were advantaged. Eric Williams’ Ecstatic was first to the windward mark, ahead of Peter Cunningham’s Power Play. Louise Racing and Alfie arrived at the mark overlapped, with the former holding the inside advantage. Aimee was next round in fifth position, just one length behind.

Most of the fleet opted to go left on the first run, leaving Aimee as the right-hand most boat in the leading group, with Power Play and Ecstatic also heading in that direction towards the end of the leg. This turned out to be a defining point of the day – the trio led into the leeward gate by a big margin. A couple of minutes behind them 10 boats arrived at the gate simultaneously, amid much shouting.

On the second beat the wind increased to 10 knots, tending to flick to the right in the stronger puffs. Power Play was again first to the second windward mark, with Aimee just behind. The latter gained marginally on the final run, with the pair arriving simultaneously at the leeward gate. Bailey then pulled out a commanding lead on the beat to the finish, crossing the line a minute ahead of Power Play, with Ecstatic third some 44 seconds later.

“Today was a perfect day, although we ducked 20 boats after the start,” said Cunningham. “Then we went out to the right – it worked out very well. We got clear air and a lift, then a header on the right hand side and were able to get up to the windward mark first. Mr Bailey was on our stern for the first four legs and then on the fifth he really got going. This has been a fantastic regatta – we’ve had a wonderful regatta, fantastic parties, the competition has been really good and it’s great to see young people out here as well.”

Today’s second race was a shorter crews’ race. In some classes this might be discounted as a side event, but Dragon crews include multiple national and world champions, Olympians and America’s Cup veterans who are at least as competitive as their helms.

The day concluded with another legendary Dragon party – a social evening sponsored by Drumshanbo Irish Gin. Similarly bright and sunny conditions are promised for tomorrow and what’s sure to be a hard-fought and tantalisingly close final race. 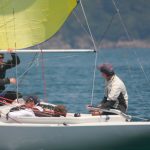 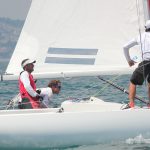 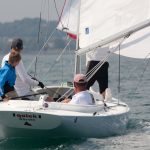 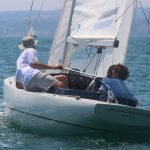 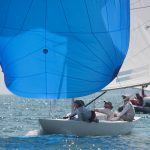 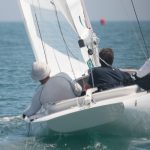 All Corinthian results can be viewed here >>>