Sailors swapped suncream and shorts for foulies and boots on day two of the Haulfryn Edinburgh Cup in Abersoch.

A stronger south westerly breeze and rolling Irish Sea was already waiting for the competitors as they sailed out for the start of race three. With the tide pushing the Dragons over the line a general recall lead to the black flag being displayed for the second start. All but one Dragon got away cleanly with the fleet being split left and right. 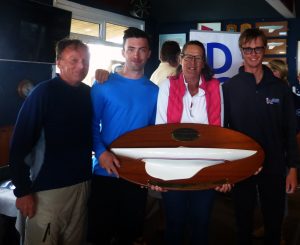 Some of those that chose to take the left-hand lane and get in the tide came out at the windward mark in front. Mike Budd’s Harry led Gavia Wilkinson-Cox’s Jerboa, Rob Campbell’s Quicksilver VI and David William’s Phantom and the fleet downwind followed closely by Martin Payne’s Bear.

Sticking with the right and the lifting breeze Bear gained a place downwind overtaking Quicksilver VI at the gate. Over on the left and gaining on the downwind legs Jerboa took the lead from Harry who held off Irish National Champion Phantom.

Winners of the Kin Trophy Jerboa’s Patrick Rigby and Jake Hardman said of their Dragon experience so far: “We recently sailed the Dragon Gold Cup with Gavia, and this is our second event as a team. We are both part of the British Keelboat Academy and we are working to help promote younger sailors into Dragons. Today has been really challenging, but brilliant fun, it was full throttle all the way round.”

A rain bearing front and larger sea state kicked in for the start of race four as the Dragons sailed up the 1.8nm beat. Tide and breeze split the fleet with Mark Wade’s Avalanche, Graham Bailey’s Aimee and Phantom choosing to go left towards the windward mark at St. Tudwal’s island. 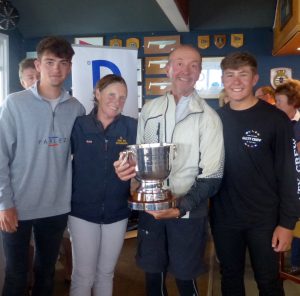 A packed spreader leg saw Bear and Martin Byrne’s Jaguar approach from the right joining the leading front runners downwind. Choosing the left-hand gate and sailing towards the shoreline Aimee and Bear increased their presence on the racecourse. This allowed Graham Bailey to cross and overtake Jaguar while Avalanche stayed hot on the heels of Bear.

With Aimee taking the win in race four and claiming the Terry Wade Memorial Trophy, it is all change to the overall results.

Racing today starts at 1055. Follow us at www.facebook.com.BritishDragonAssociation for live race updates and news from the racecourse.