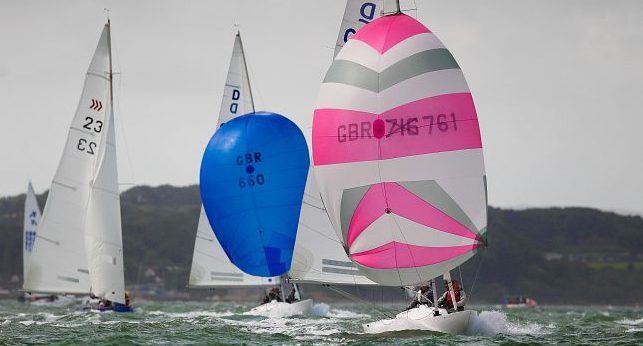 International Race Officer Gill Smith, supported by Bob Milner set super courses in a variety of wind and tidal conditions, testing the 11 competitive teams local knowledge and tactical awareness throughout the nine race series. This was the first official BDA event of the 2021 season and it was great to see Mike Hayles (GBR 764) and Patrick Gifford (GBR 515) travel south from their club in Aldeburgh, on the east coast of England, to support the event.

As Covid restrictions ease across the UK we hope more Dragon teams will travel to other regatta’s, in particular the Edinburgh Cup (31st August – 3rd Sept) on the Forth in Edinburgh, to pay respect to the Duke of Edinburgh’s Bluebottle as it races once again under the skilful guidance of Graham & Julia Bailey. It would be nice if different fleets made the effort to support various events and rebuild numbers after such a difficult time during the pandemic.

The Championship was deservedly won by Tom Vernon helming GBR 810 Badger, crewed by Adam Bowers and Ollie Spensley-Corfield. This well drilled team won four of the nine races, were usually in the right place at the right time and showed consistent speed throughout the changing conditions. Tom and his team will certainly be one of the favourites for the Edinburgh Cup up in Scotland later this year and many congratulations to the “Badger” team.

In 2nd place overall was GBR 791 Christiana now owned by Michael Wilson, but helmed on this occasion by Martin Payne, crewed by Chris Brittain & Gilly. Christiana was originally owned by Olaf Sorensen from Cork, before moving over to the Isle of Wight and winning Cowes Week when sold to Oliver Morgan and his wife Francesca a few years ago. Michael Wilson is the third owner of this well presented and successful Petticrows Dragon and the Cowes Fleet were pleased to see the boat remain on the Island.

3rd overall (just losing out on count-back) was Solent Legend Eric Williams helming GBR 682 Estatic crewed by Rory Paton (X One Design Champion) and Katie Cole from Burnham, now UK Petticrows after the successful company was sold and relocated to Portugal. Eric epitomises everything good about the Dragon Class, fair and extremely competitive sailing, willing to share his experience and thoughts after racing and a perfect gentleman on and off the water. He has won numerous championships in a variety of classes and knows the solent like the back of his hand, with Rory and Katie onboard, the smiles are infectious and their ability extremely respected.

Top Corinthian Team and 4th overall was GBR 763 Bertie helmed by Simon Barter, crewed by his son James and Donald Wilkes.  Simon and team Bertie won the final race of the championship in style, playing the centre of the course in adverse tide, whilst the fleet split 50/50 to each side.  As BDA Chairman Simon hopes many GBR boats will support the Edinburgh Cup to make it a special event, respecting the recent passing of the Duke of Edinburgh and witness Bluebottle race on the Firth of Forth once again after its amazing restoration by local boatbuilder David Heritage.

Eleven Dragons in total were out on the Solent enjoying the wonderful racing conditions including several Classic and Vintage Dragons. Patrick Giffords Basilisk took the Vintage Dragon trophy and the Classics were won by GBR39 Aurora Adrian Green.

This was an extremely well organised event sailed in the most perfect conditions. Competitors enjoyed a lovely supper on Saturday evening (following Covid guidelines), at this wonderfully located Yacht Club overlooking the Medina River, resulting in a few slightly sore heads in the morning.

On behalf of all competitors, thanks go to Gill Smith and her team of volunteers on Gemini Breeze for making it such an amazing Championship and many congratulations once again to Tom and his GBR 810 team.