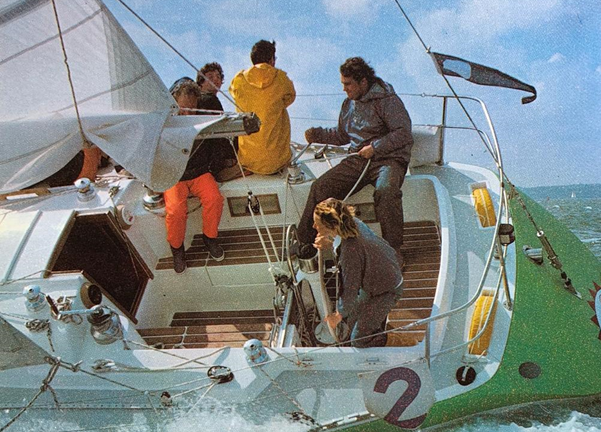 Clare Hogan who sadly died on 10th April 2021, taken from us so prematurely, will be sorely missed by her sailing friends, particularly those of us in the Irish Dragon Class. She sailed from the Royal St George Yacht Club in Dun Laoghairein her Dragons “Aphrodite” and “Cloud”.

Clare came from a sailing family where her brothers Peter, Neil and Tom are well known sailors.  Clare enjoyed success in her Cadet as a young teenager. In College she joined the UCD Sailing Club becoming a Committee member where her efforts played no small part in reviving the Club and putting it back on a sound financial footing.

Clare studied to become an Architect.  She was the first lady elected auditor of the UCD Architectural Society.   She worked in private practice in Paris, before returning to Dublin.  Whilst working in Dublin she gained a Masters degree in Urban Building Conservation. She then joined Dublin City Council as their Conservation Architect gaining a second Masters degree in spatial planning.  One of her last projects for the DCC was the restoration of the Smithfield Fruit and Vegetable Market building in Dublin. More recently Clare returned to private practise principally providing conservation advice to architects and local authorities and was regarded as one of the pre-eminent conservation specialists in the country.

Clare was never ordinary, for example in her early twenties, Clare cruised on board Rory O’Hanlon’s “Meermin” to Iceland and Jan Mayen island N of 70 degrees latitude, where they experienced and survived horrendous conditions, including a knockdown, loss of a rudder, a snapped anchor chain in 60 – 70 knot winds, resulting in a broken bow-sprit having virtually gone on the rocks. Clare’s capabilities must have been extraordinary throughout these life threatening experiences. The ICC log of this cruise is an incredible read.

For some, Clare came to prominence in the Dragon Class in 1976 when she borrowed the Dragon “Elfin”, sailed with a crew of two to Abersoch in what transpired to be particularly heavy winds, to participate in the Edinburgh Cup.  The Dragon “Isolde” from Howth also sailed across the Irish Sea but foul weather and poor visibility forced her to seek shelter overnight in a bay North of Bardsey Sound. Clare arrived safely and featured during the series by making a port tack start in one of the races and on conclusion of the event sailed back to Dun Laoghaire.

In the following years Clare sailed predominately offshore on board Kieran Foley’s “Stormbird”, a Laurent Giles Cutter 70 and Barry O’Donnell’s  “Sundowner”, an Oyster 37.

She enjoyed some measure of success in Cork Week, Round Ireland, Cowes Week and Fastnet Races and raced on the Irish Admiral’s Cup team in 1983.

From inshore and offshore racing Clare advanced to her real passion, one design racing, and joined the J24 class with the Flying Ferret.

Later she campaigned on Michael Cotter’s “Whisper”and  “Windfall”, both Southern Wind yachts, featuring in the Middle Sea Race, Maxi Regattas, Voile de St Barth and particularly the 2009 Fastnet Race, which achieved a fifth overall and fifth line honours. As well as capably doing her shift on the helm, Clare could more than acquit herself in the galley.

On her return to Dragons in the nineties, Clare enjoyed more than her share of success particularly in light and unstable conditions.  She travelled extensively to International Dragon Regattas and Championships, primarily in the UK and France.  Clare actually won a race in the Gold Cup with approximately 70 starters. The race was sadly declared void by the Jury as it was deemed not to have fulfilled all the required Gold Cup conditions.

Clare gave so much back to sailing with her presence alone, but she also did ”the hard yards”, serving on various sailing committees including the Royal Alfred Yacht Club where she served as Commodore. Clare also became a National Race Judge.

Clare’s quick wit and good humour attracted people to her.  Her daily blog on board “Whisper” in the 2009 Fastnet Race was legendary and surely should be published somewhere. Clare won first prize for her race blog which was followed by most of the fleet and many more ashore. She had become famous even before the race concluded in Plymouth.  Clare’s straight talking kept those who crossed her in no doubt where they stood.  On one occasion she made it known that she disapproved of an extension that a fellow Dragon sailor had built to his house.  On his first Christmas he received a card from Clare with the envelope addressed to “The incredibly ugly house on the Stillorgan Road opposite RTE”. Much to Clare’s satisfaction and his disgust, the postman had no trouble delivering the card.

Image 3 – Clare; Gone but not forgotten.

In life, Clare was simply an amazing woman who made a difference. She may be gone but not forgotten.

Clare is survived by her daughter Moselle, her brothers Peter, Neil and Tom and her sister Felicity.