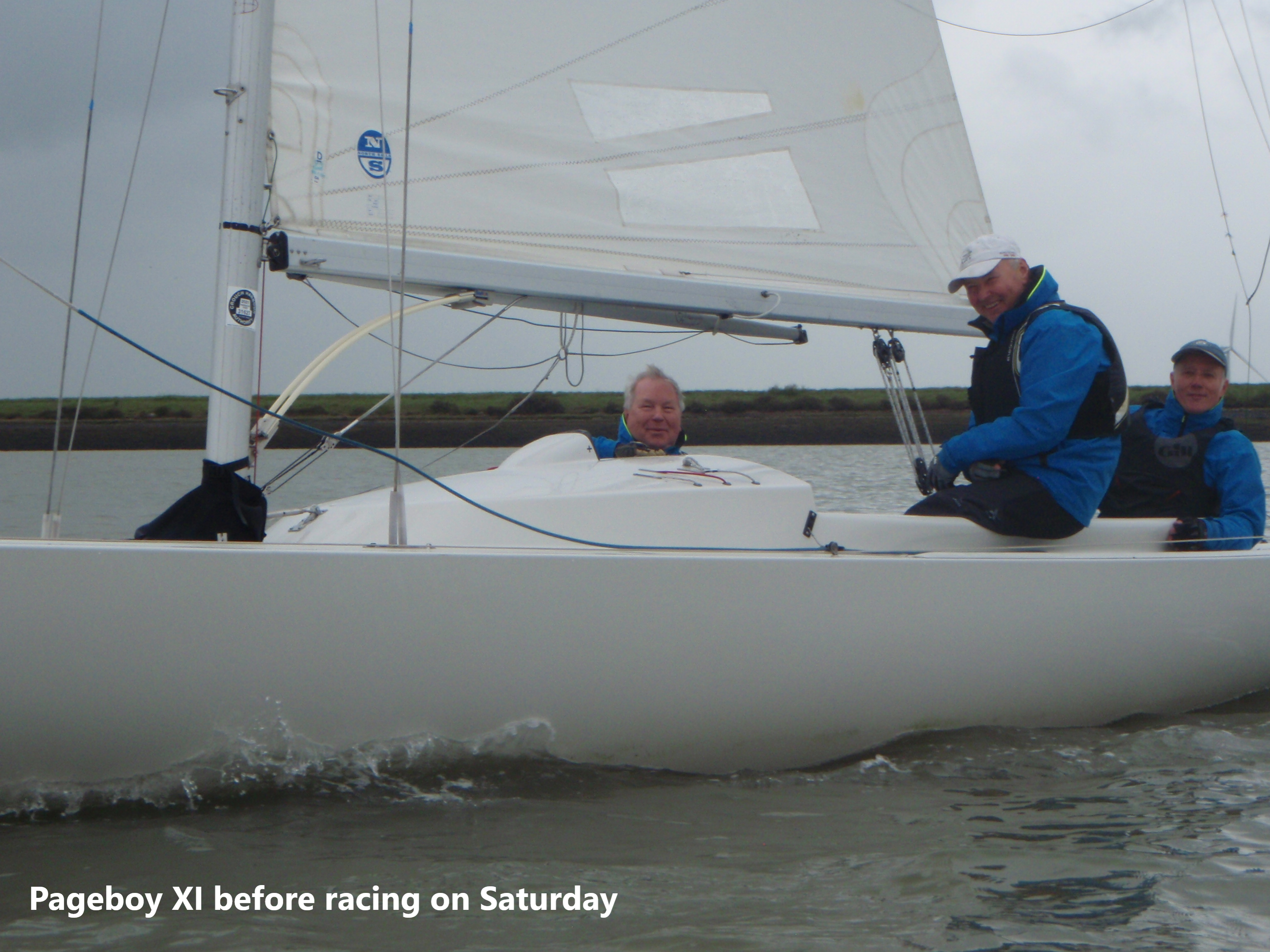 Race one had action from start to finish. Pageboy XI (Paul, Clive, Graeme) held the line into the committee boat squeezing out Anarchy (Chip, Nicola, David). To leeward, in less current, Still Crazy (Ian, Heath, Ian) made a good start, and from the middle of the line Avalanche (Mark, Mandy, Nigel) showed early intent. Still Crazy opted to tack onto Port, take a transom or two, and head to the South shore. When the fleet converged close to the windward mark it was clear that Ian’s trip South had not been beneficial.

Saturday 15th May 2021 in Burnham may have started grey and flat but the mood in the Dragon Fleet was lively, as the first Mini Series of four windward leeward races since April 2019 was imminent. PRO Edwin Buckley held a short briefing under the RCYC crane before setting a course in a flood tide with a start line a little west of Greenward on the North Shore and a windward mark on the eastern side of the mouth of the Roach.

As the race unfolded, and from the right of the course, Avalanche rounded the windward mark first with Beauty (Peter, Katie, Ben) now in pursuit. Pageboy XI arrived at the mark from the left and tacked inside Beauty to round in second; but, agreed with Beauty that they didn’t quite pull off the move, and took a penalty dropping them down to fourth moving Danish Blue (Poul, Harriet, Noddy) up to third. Avalanche lead Beauty into the final leeward gate and opted for the left buoy and a tack for the shortest distance back to the line. Beauty opted for the right-hand buoy that was further from the finish line but involved a rounding in less adverse current and no tack. The right-hand rounding, it turned out, gave an advantage of about one and a half boat lengths, and Beauty won race one by a whisker.
Race two saw Beauty lead at the windward mark followed by Danish Blue who hoisted spinnaker and promptly omitted the spreader mark. It was a costly mistake; Mark Wade drew attention to the error with a little whistle and Danish Blue returned bare headed against the current to eventually round in sixth. Beauty took her second win, Avalanche her second second, Pageboy XI third.

Race three saw new faces at the front of the fleet, the course was providing options upwind and place changes were plenty. Anarchy held off the fleet to take the win from Pageboy XI and Avalanche. Beauty could not dig herself out of the pack and finished sixth.

With a discard coming into play if race four could be completed, four boats could win overall; the odds heavily stacked in favour of Beauty who led Avalanche into the final gate and took the left buoy. Avalanche went right and very nearly took the win in the same fashion they lost the lead in race one. Beauty, the oldest boat in the fleet, took the race win and the event win counting three first place finishes. They sailed with speed, and were able to pass boats in all but race three. Avalanche finished second overall counting three second places. Still Crazy made up the race four podium bringing them up to sixth overall. Third overall was Pageboy XI. Hands Off (Andy, Teresa, Tim) and Dublin Bay (David, Geoff and Dave) had their moments up the fleet but couldn’t make an impact this time.
The fleet is grateful to PRO Edwin Buckley for a very enjoyable four races. I cannot name check everybody in the race team ‘Team Phoebe’ on this occasion so our thanks go to them collectively.

Racing continues next weekend. We also have the RBYC Whitsun Regatta to look forward to where we expect to have the company of Richard Davies in his beautiful cold-moulded ‘Flotation’ with a guest appearance from Stavros.