Four races on Saturday were completed in a light NE sea breeze after a postponement for this to arrive. The beats were very true and boats that went right did not suffer even though out in more adverse tide. The racing was close and there were four different individual race winners: Avalanche GBR722 (Mark, Amanda and James Wade), Vivacious GBR797 (Dan Wastnage, Andrew Norden, Harriet Davies), Pageboy XI (Paul Taylor, Graeme and Clive Page) as well as Badger GBR810 (Tom Vernon, Adam Bowers and Ollie Spenshey-Corfield). 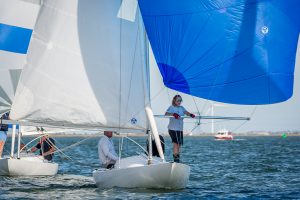 A short first leg meant that the many boats approaching the windward mark on port tack had to take care. The black flag made an appearance in race three, after a general recall, and also in race four. The tide had turned for race four and two boats were black flagged.

All competitors enjoyed a drinks reception in warm sunshine on the MYC Club pontoon after racing sponsored by local brewers Shepherd Neame. 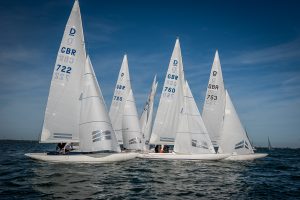 Two races were held on Sunday with a Westerly wind, in the same area of Long Reach, before the wind died. There was a long run against the incoming tide in the shallows on the North side in Race five. Anarchy GBR825 led for most of the two lap race but were overtaken crucially by Badger late on. Local boat Gandalf GBR726 (Edwin Hannant, Ross Porter and Phil Stacey) was the popular winner of Race six. They were one of only two boats to run along the South shore in the dying breeze.

Badger and Anarchy continued their duel for the Championship and although Anarchy beat them in the final race this was not by enough to hold off Badger. 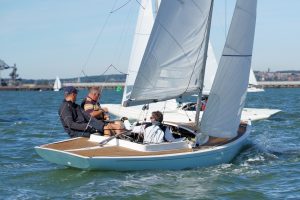 The east coast Dragon championship winners were Badger GBR810 by one point from Anarchy GBR825 of RCYC who also took the Corinthian title. 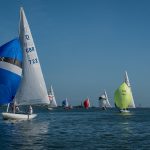 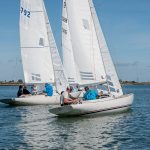 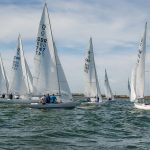 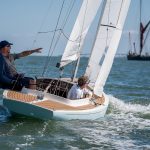 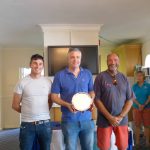 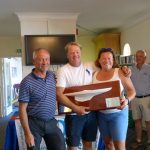 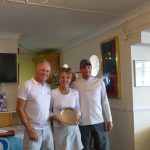 Thank you to Paul Babington Richard Janulewicz for the images.