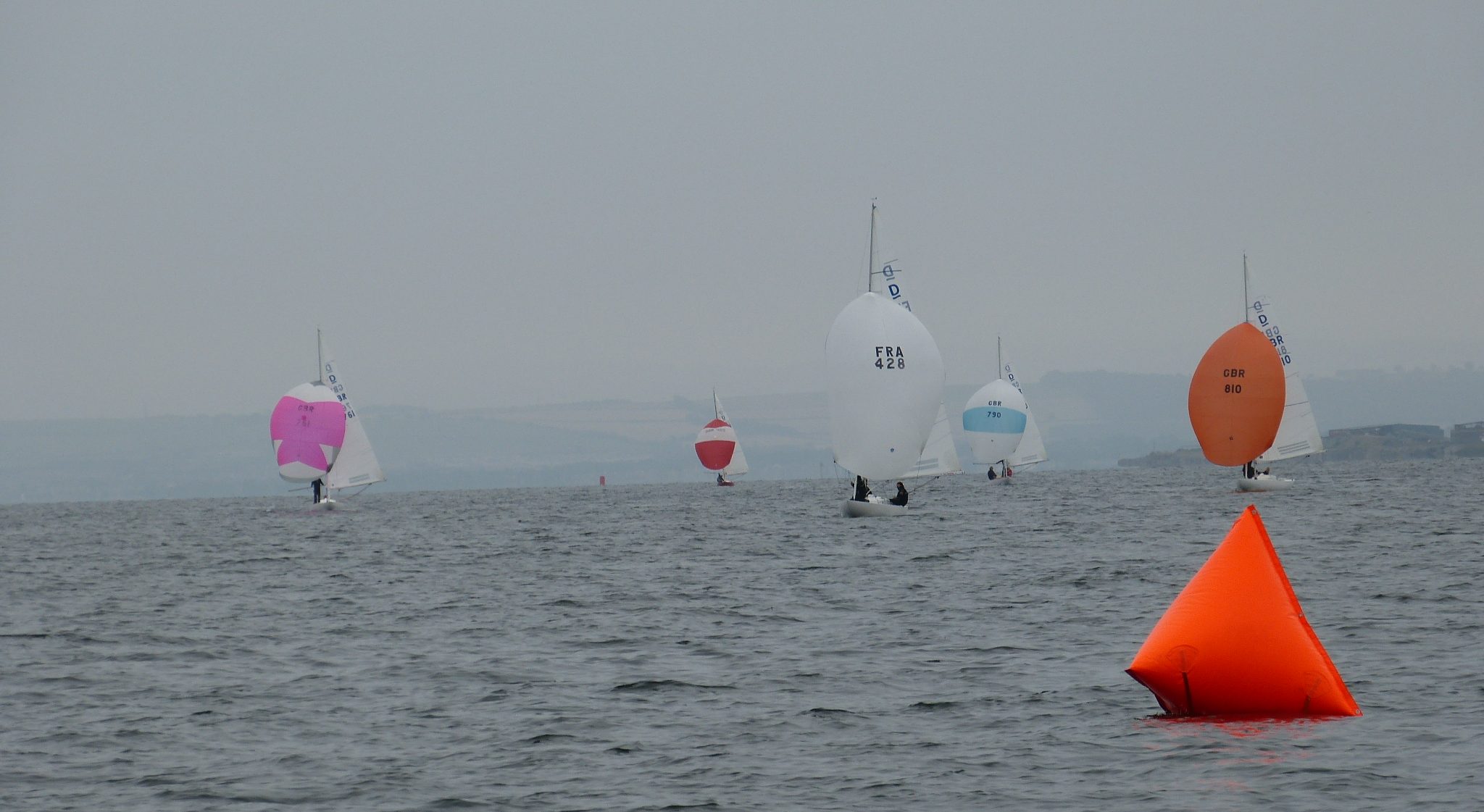 A gloomy day greeted the Dragon sailors and event team in Granton Harbour on the final day of the Edinburgh Cup 2021. With just one point separating the top three boats overall

The conditions remained consistent with the week and a gentle seven knot easterly wind was present for the start of race six.

Mike Budd’s Harry 818 got away to a good start while unfortunately Mike Hayle’s Naiad 764, Red Kestra 81 and Fei Lin’s Flirtation 633 had to turn back as not making the line.

The first beat saw the fleet split in two in the light breeze with Bluebottle taking the left towards Fyfe and Badger favouring the right hand side of the course.

Out in front from the first beat was Patrick Gifford’s Basilisk 515 coming in from the Edinburgh side to lead around the first windward mark followed by Royal Forth Yacht Club local sailors Wiz Too, Richard Davies’ Flotation and Badger.

Basilisk looked to be comfortably in the lead going through the first gate but it was the second beat and a move of the windward mark that saw some change in positions.

Gery Trentesaux’s Bande a Part FRA 428 inched past Flotation, Badger and Basilisk to lead up to the second windward mark and through the final gate.

But it was not to be for the French team and it was Basilisk, the vintage Dragon sailed by experienced team Patrick Gifford, Geoff Butcher and Philip Catmur who sailed an excellent race to take line honours in race six.

Badger held on to their second place with Jerboa, Flotation and Bande a Part taking third, fourth and fifth place respectively.

A superb win for Basilisk securing the Corinthian title, helm Patrick Gifford said once ashore “We felt we were at the back end of the boats that were going fast all week. So it was very nice to be up there and beat them. It has been a good event, it is a great open space to race in.”

Second place in race six, keeping Jerboa and Bluebottle behind was enough to secure the overall Edinburgh Cup win for Badger. Crew Oliver Spensley-Corfield commented at the prize giving “I am very pleased, it is a relief after a tough week. It is tricky sailing, sticking at it, yesterday we had a bit of a wobble and had a few comebacks. But we managed to hold our nerve and keep it together.”

For images from the event visit the Ed Cup Gallery.

SAVE THE DATE 2nd – 9th July 2022
The Edinburgh Cup will be held in Falmouth hosted by the Royal Cornwall Yacht Club.