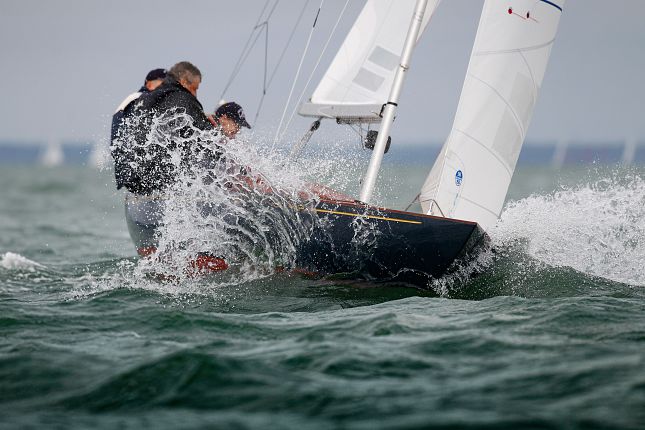 On several occasions, in varying craft, Graham Bailey has won individual races and entire classes at Cowes Week. But racing at this year’s Cowes Week, in the Dragon fleet was a new experience for Graham and crew.

What was it like to be sailing Bluebottle in amongst other Dragons at Cowes Week?
First of all it was a massive privilege to be asked and I thank Simon Barter as BDA class Chairman for steering the Royal Yacht Britannia Trust in our direction. Together with Julia we teamed up with “H” who was absolutely the right choice having undertaken the restoration with his son Will, and been part of our racing team for so many years. With privilege comes responsibility which can lead to apprehension and so first priority was to get round in one piece without any embarrassing collisions, groundings, sinkings etc.

“I must admit though that once ahead, thoughts of Bluebottle winning her first race in 60 years raised the pulse a little so I tried to not even think about it. “

H sensed I was a bit nervous on the morning of the first race so he wisely advised that Prince Philip wanted her to be raced and so he would expect us to not hold back “..you’ve got to put her in there mate.” He then said “… anyway, I’ve got lots of blue paint….. and some wood”. H has a way with words and this I took as license to race.

How did it feel to get the first win of the event?
We only had about 50 minutes on the water to work on the set-up before the first race which we did by eye and by feel as the standard modern rig settings are largely meaningless in a 1948 Camper and Nicholson. So we had no idea what to expect but with about 10 minutes to go, she was somewhere close to looking ok. However, the first leg was upwind against the current so we had to short-tack up the Island shore. This was not ideal for a first outing in front of hundreds of spectators so we decided to be conservative after all until we found we were crossing tacks with the lead boats and she seemed ok.

Eric Williams pulled out a big lead but we caught up and then had a very close bow-to-bow battle for about 50 minutes or so before eventually we got a small shift that put us ahead. That was a bit lucky to be honest and I wouldn’t have minded losing to Eric, Katie Cole and Noddy because they sail to such a high standard but the main thing from our side was that we had our first measure of her performance, and she was not slow! I must admit though that once ahead, thoughts of Bluebottle winning her first race in 60 years raised the pulse a little so I tried to not even think about it. When we finally got the winning gun I think we were all a bit emotional. Bob Downie of the Royal Yacht Britannia Trust, together with his chairman, Neil Rankin, had put so much into the project not knowing quite how it would turn out so we were delighted for them and for everyone who played a part in making this happen.

Were you surprised at how well Bluebottle performed after so many years?
Frankly yes. I had every confidence that H, Will and their team had restored her to the highest standard without compromising her character and aesthetic so it was reward enough to be racing this most iconic of all Dragons. However, to find she was reasonably competitive in the conditions we faced was a huge bonus and more than any of us dared dream of. Standing back though it is also testament to the integrity of the Dragon class rule that produces such evenly matched boats regardless of the era.

You have won at Cowes Week before in your own Dragon did this win feel different?
This felt quite unlike anything I have known because of the heritage of the boat. To think that Her Majesty the Queen and Prince Philip sailed her in the early years of their married life together and then more recently that Prince Philip was regularly updated on the restoration and that he wanted her to be race-fit again and then to find ourselves taking their positions in the boat was very special indeed.

It suddenly struck how Bluebottle is still writing history and how much she means to so many people in the wider sailing community and beyond.

I think we all felt the Duke was with us at times and whilst we were saddened by the fact that he never got to see her race again, everyone we spoke to said how delighted would have been. One elderly gentleman came to find us on the pontoon after the race on Thursday. It was pouring with rain – he had travelled from Portsmouth, didn’t have an umbrella or hat and was dripping wet but he was determined to see Bluebottle. Turns out he was a long-standing crew member onboard Britannia and had sailed Bluebottle at one point. He was utterly delighted to see such a magnificent restoration and to see she had won. We had a couple of beers sheltering from the rain afterwards – his eyes welled and so did ours as we listened to his stories. It suddenly struck how Bluebottle is still writing history and how much she means to so many people in the wider sailing community and beyond.

Bluebottle is now in Edinburgh, what are you looking forward to most sailing at the Nationals?
The Royal Yacht Britannia Trust who own her have an amazing set up and we look forward to spending time with their team who have gone to such great lengths to bring Bluebottle back to life. They are hosting drinks for the Edinburgh Cup competitors one evening so that will be very special. The Royal Forth Yacht Club will put on a super championship with former Edinburgh Cup winner, Robbie Brown on their race team. But above all we are so privileged to be racing the Duke of Edinburgh’s boat, in the Edinburgh Cup, in Edinburgh. How cool is that?

Do you think Bluebottle could win the Edinburgh Cup?
I am not even going to think about that. She won Cowes Week with a day to spare and we still have much to learn about her but the question is: does she, and do we, have the speed and clinical precision required to prevail on squared-up windward / leeward courses? I don’t know the answer but I can say that the project has already justified itself and proved a towering success so regardless of the result – Bluebottle is back!