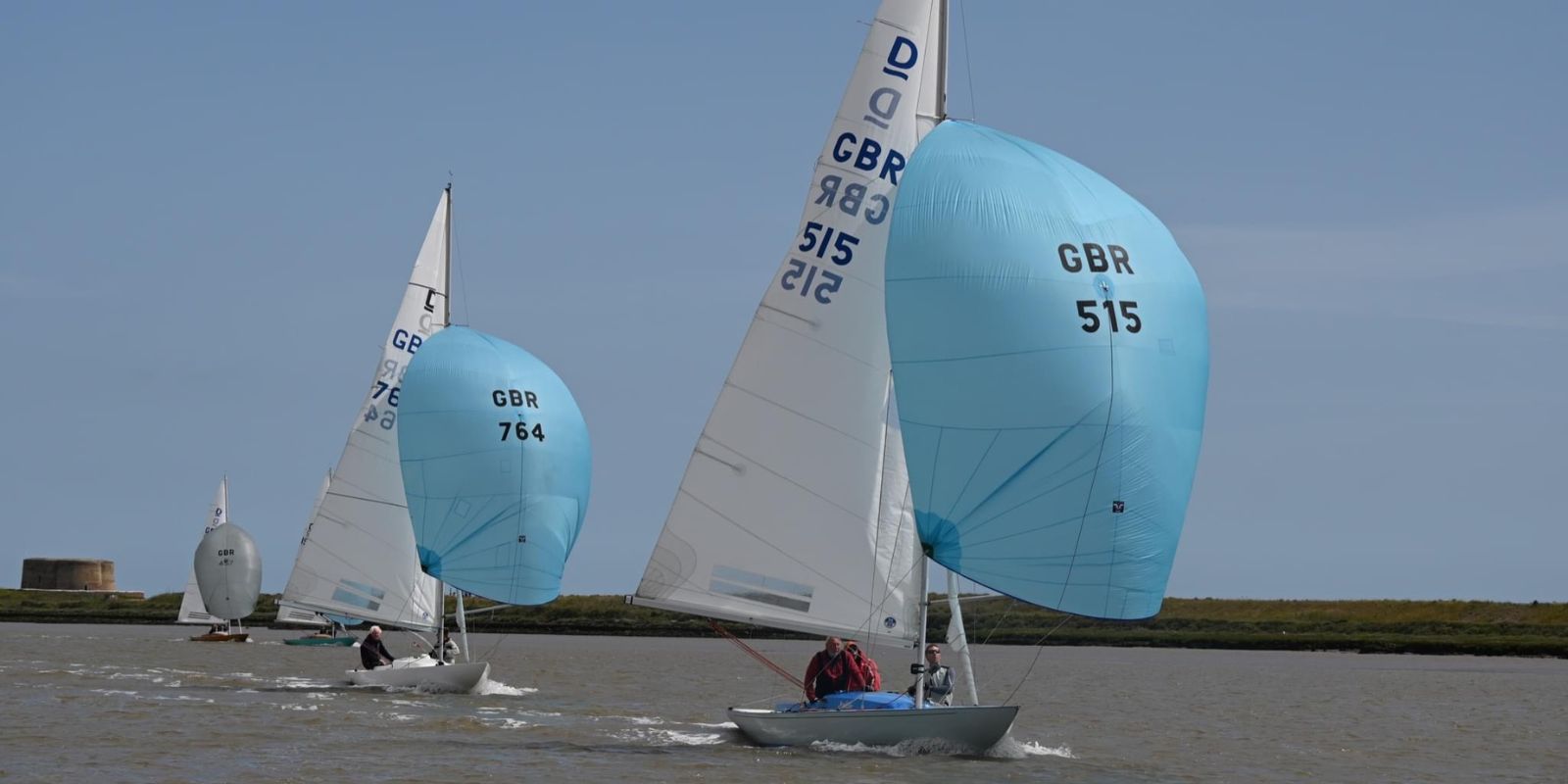 Aldeburgh Yacht Club played host on the weekend of 18th-19th June for its first ever Dragon Open Meeting outside the AYC Regatta. It was also the BDA’s Classic Championship and Vintage Championship.

Ten boats took part, five Classics, defined as carvel-planked boats, three Vintage, defined as boats at least 25 years old not of carvel-planked construction and two newer boats only eligible for the overall prizes. There were three visitors, Ran (Classic sailed by Crispin Blyth), Polly (Classic sailed by the Street family) and Cavalier (Vintage sailed by Carl Whitewood). Seven of the Aldeburgh fleet were also present for this new experience.

There was a wide range of boats from different builders. Easily the most elegant was Ran, a beautifully restored 1966 Pedersen and Thuesen boat. Polly also looked in good shape after a near death experience when a large tree fell on her, as did Cavalier, a Lallow cold-moulded boat.

The racing took place in the Home Reach and Blackstakes Reach in a NE wind of over 20 knots on Saturday, with a wind against tide chop, and a lighter 13-15 knots on Sunday. Excellent Windward-leeward courses were set by Simon Fulford, ably assisted by his brother Tim and three races were sailed each day for a total of six, with five to count.

The racing was quite hectic, particularly on Saturday. Ten Dragons are quite a tight fit in the Alde on a windward start in 20+ knots. However, Basilisk, sailed by Patrick Gifford with his son Michael John and Martin Spall put her mark on the event by winning all the races on Saturday convincingly, with Harkaway always second. Among the visitors Ran did best, and would have been even better but for problems unrolling her genoa after one of the runs.

Sunday’s results were similar except that Basilisk was over the line in the second race and only managed to get back to second, which Harkaway won. Ran consolidated her third place with places 2, 3 and 4.

Overall, therefore, Basilisk won the Open Meeting and the Vintage Championship from Cavalier and Harkaway was second overall and won the Classic Championship. Ran was third overall and second Classic.

“It was a great success and the visitors all want to come back next year!”

There were some minor moments of excitement. Cavalier’s crew, Becky, fell off and her lifejacket then inflated vigorously, as it should, which made recovery more difficult. Polly, sailed at that time by her 89 year old owner Tim Street went so hard aground due to the crew’s inattention, that the water wasn’t even up to their knees when they got out to push.

The Hunt brothers on Panther finally learnt from crew Nick Hayles why they had coarse and fine tune lines for the runners! The gear topic of the weekend was genoa furling gear, one that Ran, Naiad and Panther would probably all very much like to forget!

It was an excellent weekend. Good racing, excellent race management, first class launch and recovery by Demon Yachts and AYC and a most enjoyable Saturday evening party, courtesy of Chris and James Mehew. There was a lot of discussion at the end about next year’s event!